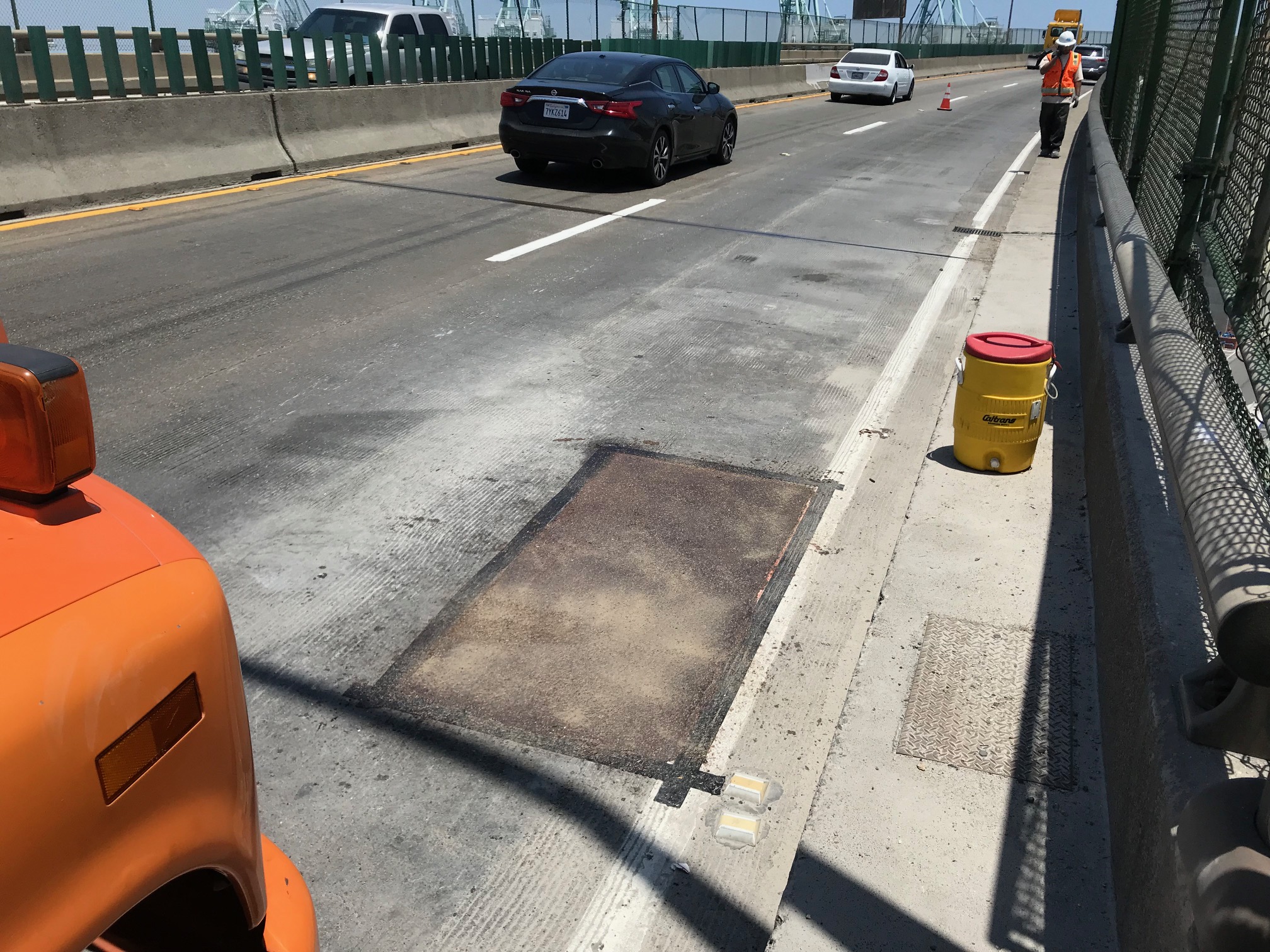 Caltrans chose to use FasTrac Hybrid Polymer Concrete to repair a spot on the Vincent Thomas Bridge, spanning the Los Angeles Harbor and linking San Pedro and Los Angeles with Terminal Island. The bridge carries a heavy traffic load, round the clock, so reducing down time was critical. The fact that the repair could be traffic ready just 1.25 hours after the pour kept traffic disruption to a minimum. Environmentally friendly, the zero VOC formula requires no explosive catalysts to activate the mix, unlike polyester based systems.

Hawaiian Dredging was hired to install additional lanes along the heavily traveled Pearl City and Waimalu Viaduct in Honolulu, Hawaii. The project was designed to increase the capacity of the H1 freeway for Westbound commuters during the afternoon rush hour. FasTrac 303 Cement and FasTrac Polymer were instrumental in the repair, allowing the construction crews to minimize downtime on the busy highway. Sections of the bridge deck were removed and replaced each night to avoid any impacts to the afternoon and morning rush hour traffic. High pressure water blasting equipment was used to demolish old concrete, leaving a hole and exposed rebar. Then the hole was filled with high performance rapid setting concrete made with FasTrac 303 Cement and FasTrac Polymer.

Emery Sapp & Sons of Columbia, Missouri, completed a Design Build bridge project on I-70 in Columbia utilizing some very unique design and construction concepts that delivered new bridges in a fast track manner while minimizing disruption to the traveling public. One unique aspect of this project was a Slide In Bridge Construction (SBIC) where one of the new bridges was constructed next to the existing bridge and then slid into place when completed. To complete the Slide In Bridge it was necessary to utilize a rapid strength concrete for the bridge approach closure pours so that the new bridge could be opened to traffic quickly.


State Route 291 at 23rd St. in Independence, MO is a heavily traveled intersection that is also a truck route servicing heavy industry in the Kansas City area. Average daily traffic at this intersection is approximately 27,000 vehicles with 10% truck traffic. As is common at intersections, the asphalt pavement tends to rut and shove and in 2001 the Missouri DOT decided to try a thin 4” concrete overlay in order to get longer life out of the pavement. Fast forward to 2016 and the thin concrete overlay performed very well giving the intersection three times the life of the previous asphalt overlays, however some of the concrete overlay panels were starting to show their age and in need of repair or replacement. MODOT decided to replace a number of worn out areas, but given the high traffic count in this busy intersection there was a need to take a “Fast Track” approach to the reconstruction. FasTrac 300 Cement was chosen as a means to complete the concrete paving repair and allow for very fast return to traffic in order to minimize disruption to the traveling public and local businesses.

Lane closures began at 7:00 p.m. on Friday evening and a milling operation commenced to mill out the damaged areas. Given the thick underlying asphalt pavement and concern over potentially poor asphalt just under the 4” concrete layer, the decision was made to mill out to an average depth of 9”. Contractor, Realm Construction, started placing the FasTrac Concrete at 7:30 a.m. on Saturday morning, November 5, 2016. There was a total of ten slabs replaced ranging from just under one cubic yard to just over thirteen cubic yards. Three volumetric mixers were utilized as the location did not allow for material re-load and the mixers were reloaded at a site 15 minutes away from the pour site. A total of forty cubic yards of FasTrac Concrete was placed and finished in just under four hours. The concrete reached in excess of 4200 PSI compressive strength in 2.5 hours and in excess of 4500 PSI in 3 hours – outstanding performance given the cool 50 degree temperatures and placement slump of 8”-9”.

The FasTrac 300 Cement allowed the intersection to be totally reopened to traffic by early afternoon and is expected to provide long service life as the product contains zero chlorides and the low water/cement ratio of .36 afforded by the cement provides obvious long term quality benefits in reduced permeability and extremely low shrinkage. 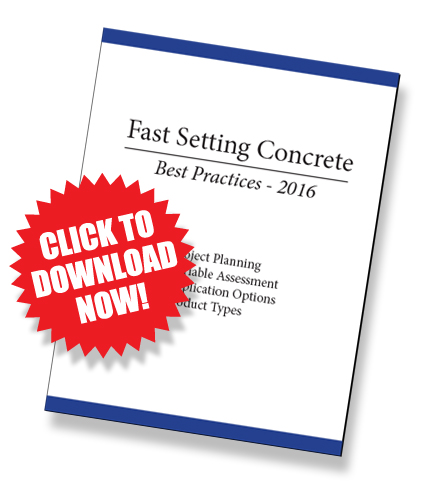